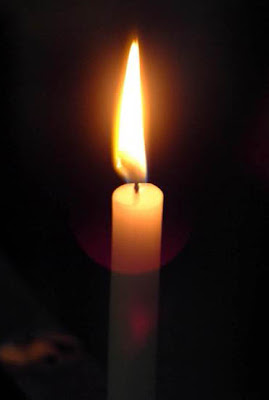 Wow. It takes a major holiday to get me off my proverbial stool of do-nothing a post to this blog! Huzzah!

Last night, as many of you know, was the first night of Advent. Now, we're not Catholic, or Lutheran, or any of those liturgical, high-church people. (Not that there's anything wrong with that!) We're Assembly of God, which (for those of you who don't know) is a Pentecostal denomination. Having grown up in that sort of atmosphere, Advent was not something we were taught about.

I grew up feeling like Christmas came and went, and never savoring the season. Every year on December 25, when it was time for bed, I'd feel this huge "let down" that it was all over, and I hadn't really enjoyed it.

What I was really feeling was the secular hustle and bustle, and, although it was a "Jesus" holiday, we were just as caught up in all that as the rest of the world.

(This isn't a blame-my-upbringing post, mind you. It's very, VERY easy to let that be the default way to celebrate.)

But, as I got older, got married, and had a child of my own, I wanted to start some traditions that she would remember when she was older. I wanted her to learn to take time out during the Christmas season and really reflect on what a Gift we have been given. I don't remember when we started lighting the Advent candles, but I do know this: our first candleholder was one Jason picked up at a thrift shop, and it isn't even an "officially licensed" Advent do-dad. It's long and made of metal, and it's got reindeer heads at each end. But it had the requisite number of holes, and we were learning as we went.

Finally, I bought a nice candleholder on sale after Christmas a few years ago, specifically made for this purpose. We were official!

Every year - and I do mean EVERY year, I forget to start the whole thing. Many years, we end up doing the four Sundays (because we've not progressed to the every night thing that some have, due to our schedules) on the four DAYS before Christmas because I've forgotten that long.

Last night, thanks to a Facebook friend from church, I remembered! (Thanks, Ben!)

And, no, they aren't the "traditional" colors. They're white, except for one which is red. I'm sorry if that offends the sensibilities of my more traditional readers, but see my previous disclaimers. There were no purple or pink candles in the store!

I found a simple devotional online, and, to keep Anna Marie engaged, I had her read part of it. Shazam - why have I not tried this before? We had a discussion about waiting, and I asked Anna Marie how God wanted us to wait for things (and Him) and she said, "Joyfully!"

(I think I'm going to email our pastor, and suggest big fat Christmas bonuses for our children's pastors. They are making my job way too easy.)

I loved her answer - JOYFULLY. All those years I felt empty after Christmas was over, I wasn't waiting joyfully for the Advent. I was waiting impatiently for the chance to open my presents and stuff my face, and after those things were done, there was a big fat hole left in my heart.

JOYFULLY - like parents waiting nine months on a child's birth. We should be waiting on His Advent with joy, and anticipation just like that. When the baby is born, you don't feel empty that the birth is over - you feel joy that the fulfillment of the promise is here.

May we all wait, JOYFULLY, for the Promise of Christmas.
Posted by Melissa at 3:50 PM 1 comment: