What I did on my summer lunch break 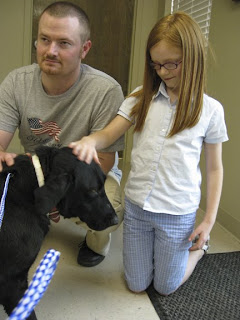 In all the years we've been married, we've never owned a dog. Part of that is due to location - we've always rented, and couldn't have inside pets, and never had a fenced in backyard. And really, I'm not much of a "dog person," but I've tended to like the larger, more mellow dogs more than the smaller, yappy ones.

But, something has happened to Jason in the past couple of weeks. I put a "pet of the week" ad in the paper, and I mentioned that there were two female Labrador Retrievers, both spayed, who had been surrendered by their owner because he was going into the military.

I may have said, "Man, if I had a fenced in backyard, I'd go get those dogs."

You know, in passing.

Last Sunday, Jason and I may have had a conversation about dogs, and how we have an enclosure in the backyard that would make a good dog pen.

And last night after church, Jason might possibly have asked me to call today and see if the labs were still there.

I never in a million years thought that those two dogs would still be unclaimed after two weeks - but they were. Well, at least one of them was. The other has been paid for by an elderly woman in the next county, but she hasn't picked her up yet.

I was instructed by Jason to tell the ladies at the shelter that if she didn't come get the other dog, to give us a call.

We almost got two dogs today, y'all! TWO!

Jason still feels really badly about the two being separated, since they've been together their whole lives, so I can't guarantee that we won't end up with another dog in the near future.

Anyway - on my lunch break, we went to meet Delta. We paid for Delta, and then we left so Jason could get the pen ready, and bring the van.

After school, he came by to get me - and Anna Marie had no idea what was going on. When the tech went to get Delta, she was a bit hesitant. But - once she got down on the floor, and saw how gentle the dog was, she was fine.

Delta had a little trouble being convinced to get into the back of the van, but she rode through town with us just fine. Anna Marie is playing with her now, while Jason finishes getting the pen prepared. I hope this will give her something to do besides play that silly DS all summer!

For a larger dog, Delta is very gentle. She hasn't jumped up on us at all, and she's not been a "barker." I just hope she can adjust to the relative quiet of our neighborhood - that shelter was loud!

I think we'll enjoy this new "adventure" of dog ownership. I just hope Jason knows what he's gotten the rest of us into!
Posted by Melissa at 3:38 PM

I don't know if those are capris or Bermuda shorts AM has on, but I meant to tell you how much I liked them when you sent me that pic yesterday.

I got that whole outfit at Jack n Jill for about seven or eight dollars. They're supposed to be capris, but she's so tall they're more like Bermuda shorts. That's one of her favorite outfits too!

Ooooooooooooh that IS a big step! Dog ownership!

May you enjoy all of your days with this lab, and possibly two labs.

I hear they are excellent with children and very easy going.