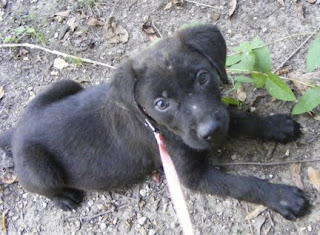 A.K.A The Luckiest Dog in Tate County.

I never knew my husband would turn into such an animal lover. He'd had dogs growing up, and his mom still had one of them when we got together. But he'd never seemed that attached to them, and, up until a few months ago, we'd put the idea that we could own a furry friend right out of our heads because of our living situations.

And then, Jason hit upon the idea to use the old enclosure in the backyard as a pen. And apparently, the doggie floodgates have opened, because since May we've gone for zero dogs to THREE of them.

You've already met Lucky and Delta, the yellow lab mix and full-blooded black lab we rescued from the local animal shelter. They're good dogs, if a little goofy. Jason has worked TIRELESSLY with them, on every behavior issue.

I think we now own stock in several doggie-treat companies.

He even bought himself a little drawstring treat bag that fastens to his belt, for when he takes them out on walks. He stops at a park up the street that has a gazebo, and practices sit/stay commands.

(Lucky is catching on much faster than Delta, by the way. Jason says she's a typical stubborn woman. I say she's just bored with the simple commands she's being given.)

Anyway, Jason took my car to my dad's house on Saturday, to hook his computer up and see why the "Check Engine" light was coming on. On the way back from the test drive, they see a little black puppy on the side of the road.

Jason, who was in the passenger's seat, opened the door. The puppy jumped in and sat between his feet in the floorboard.

It was love at first sight.

Jason brought her home, and I offered to call the city to take her to the shelter, which was closed for the weekend.

"I'm sure they don't need another dog," he said.

"Neither do we," I thought. And maybe said aloud. I don't remember. But I DEFINITELY was thinking it.

The puppy lived, barricaded, in our kitchen from Saturday afternoon until Monday afternoon. Do you have any idea how hard it is to cook with a small animal at your feet? DO YOU? And to have to watch your step, for fear of disturbing the "presents" left by said animal?

And to have to eat your cereal standing up in the kitchen, because if you cross over the threshold into the dining room, that puppy is going to cry and you won't be able to eat peacefully?

Not that she's not perfectly lovely. I'm just sayin'.


I tried to give her a good home with my cousin at church on Sunday, and Jason got mad because I'd tried to "give away his dog."

Gave me the "talk to the hand" sign right up in the choir loft!

So, Monday morning bright and early, I took the puppy to the vet while Jason went to Memphis. And, $62.50 later, she had a clean bill of health (and a $17 bottle of shampoo to clear up what the doctor called "fungus" but I think is just "mange.")

(And no, I've never spent $17 on a bottle of shampoo for myself, thankyouverymuch.)

The doctor gave her some shots and a dewormer, and said she was OK to live with the big guys in the backyard. Glory be! Coffee in peace once more!

Anna Marie named her "Annie" after a character in the Magic Treehouse books. She and Jason went to Walmart, and bought her a tiny pink collar and a teeny pink leash, and now Anna Marie walks the puppy while Jason walks the big dogs.

I saw them on the sidewalk as I came home last night after working late, and yes, it's the cutest thing you've ever seen.

She seems to be getting along splendidly with the other dogs. Jason did the introductions, and other than a whole lot of sniffing, there wasn't much controversy going on. This morning when I left for the gym, I even saw Annie and Lucky curled up asleep in the dog house!

I suppose it'll be good for Anna Marie, who is still a bit intimidated by the adult dogs. She can have one all her own, that's her size, that she can get used to as it grows over the next several months.

And if anyone is going to have to get a second job to pay for these animals, you can be pretty sure it isn't going to be me.
Posted by Melissa at 1:12 PM