Sometimes, being a mom is kinda like being God. 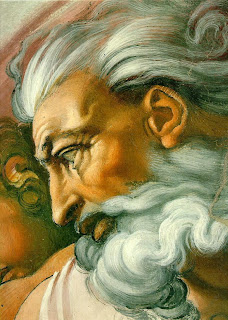 You know, in that "Better clean up your mess because you won't like it if I have to step in" sense.

(Because I'd MUCH rather see my issues and start to deal with them, before God has to bring them to my attention. Because sometimes He can be a little drastic. I'm just sayin.)

I actually started last Tuesday, in the space of time after I take her to school and before I have to be back over there to volunteer with the PTO. I carried out three Walmart bags full of T-R-A-S-H.

(And lest you think my kid's room is a landfill, bear in mind that I'm including Happy Meal toys and broken Dollar Tree trinkets in that designation.)

Today, I did the same thing. Another couple of bags of trash, plus two large-ish school projects. As much as I love that model of K-9 she made last year for her class, I just don't have room for the pooch anymore.

I wisely made sure to carry the items to the trashcan, which was on the curb, because I've made the mistake of ditching it in the kitchen can one too many times - and then she throws something away herself, and discovers what I've done.

At lunch, out went another 13-gallon bag. I took all the "junque" on her floor, placed it on her bed, and will give her a checklist this afternoon.

• Pick up EVERY SINGLE THING on this bed. Individually.
• Put it WHERE IT BELONGS. If it's a book, put it on the bookshelf. If it's a small plastic toy, put it in your toy box. If it's paper, put it in the sidetable drawer.

If it's money, give it to me. KIDDING! Well, only slightly.

That's it. That's the extent of what I need her to do today. Go through the stuff on her bed, and put it away. I'm not asking for the cure for the common cold here, folks.

I think she shall be pleasantly surprised when she gets to the bottom of the pile, because her reward will be several items she's been looking for over the past couple of weeks. I'm not going to even tell her they're in there - I'll know she's done her job when she finds them.

This weekend, Jason is going away with the men from church for four days. Know what I'm NOT going to be doing while he's gone? Cleaning her room.

She may get a bit miffed if/when she figures out where some of her "things" have gone, but I think there's a life lesson to be learned here: if she had dealt with it when I told her to, I wouldn't have had to step in and be the Cosmic Sheriff.

Ugh. I need to do that for my kids, but there are just too darn many of them.

"too darn many of them" - that made me laugh! I often think how much more challenging my job as a mom would be if I had more than one kid to deal with!

She did a great job, except for the stuff in the clothes basket on her bed (which I didn't discover was still full until bedtime!) She claims she didn't know it was part of the deal, but Jason said he tried to tell her!

Guess we need a little remediation in the God department.