You just THOUGHT I was back from the Bloggy Wasteland 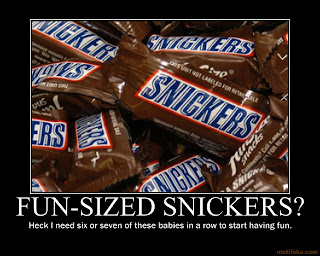 Instead, I continue to take long, unscheduled breaks from Melz World.

Heh. Guess I showed you.

In the past couple of weeks, we've finished up our One Month to Live challenge, and, as a result, I'm thinking a lot more deeply about some things than I might have otherwise.

And, last weekend, Jason went to Discipleship Walk, the life-changing retreat I went on last fall. And, well, it was life-changing for him as well.

And now, I've been thinking a lot (since yesterday, anyway), about self-control.

I thought I had self-control. Most of the time, anyway. I've never been a binge eater, unless you count the whole bags of Vinegar and Salt Lays I'd inhale in college. (And really, since their slogan is "You can't eat just one, I seriously think that doesn't count.)

I've lost 90 pounds. I think that speaks to some measure of self-control, don't you?

But lately, I've been letting that self-control slip. And my waistline is starting to show it.

And then yesterday after church, Anna Marie told us what their verse was in Children's Church: "A person with no self-control is like a city with broken down walls (Proverbs 25:28)"

Man. That hit me as very profound. We spent a good bit of time at lunch talking about what that verse meant. I explained to her that in Bible days, cities had walls to guard their residents, but a broken down wall let all sorts of things in.

Not that I've ever been accused of either of those. It's just, you know, an example.

So, I'm looking at my self-control today. I am exhibiting a major amount of it, because one of my co-workers keeps putting snack-sized Snickers on her desk. And she isn't even there a lot of the time, so no one would know it was me getting one every time I walk past.

But I would. And eventually, so will my pants.

And I'm looking at my self-control when it comes to wasting time. Instead of getting caught up in watching TV when I got back from the gym this morning, I sat and ate my breakfast quietly, enjoying the short solitude before my people-filled day began.

So, today, take a little time to look at areas when you need to exercise a little self-control. Let's build up those city walls, instead of letting them be broken down.

Your pants, and probably your sanity, will thank you.
Posted by Melissa at 1:08 PM

Can you just email me this every morning? Or better yet, call me and remind me?