Thank you, dear, for getting my best side. 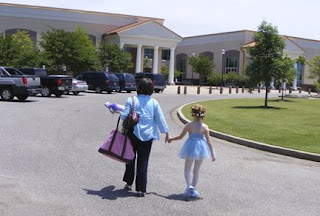 (I found this on the camera sometime Saturday evening. He thinks he's pretty slick, doesn't he? Notice what I'm carrying - Anna Marie's hand, my purse, a tote bag full of makeup and hair stuff, and her bag of costumes. What's he carrying? The camera.)

Anna Marie had her dance recital on Saturday, and I'm just stoked we survived the whole weekend. We had Relay for Life on Friday night, and then this took up our whole Saturday.

She was, of course, adorable. More than usual, since I'd purchased some ($9!) sponge rollers in an attempt to coax her stick-straight hair into ringlets. So cute, and yet, so temporary. Despite my best efforts, when she appeared on stage the first time (about an hour after her hair was fixed) they were halfway gone, and by the second appearance (an hour after that) they were merely amber waves. 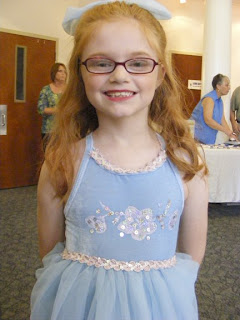 We had a pretty big crowd with us this year - my mom, my aunt Esther, my two cousins, and my cousin's two-year-old daughter Amelia. I wish I could've gotten some shots of that cutie trying to dance along with the girls onstage, but it was dark, and we were reminded repeatedly "No flash photography!"

Like anyone with any sense would expect a regular flash to reach up there on stage! But I digress.

Her first dance, the ballet, was from The Little Mermaid (Part of That World). I can see so much improvement over last year! The second dance, the tap, was from the musical Jersey Boys, which, if you don't know, is about Frankie Valle and the Four Seasons. Mom and Aunt Esther got a big kick out of that segment, because of all the old music. Anna Marie shook her bottom to a medley of "Stay" and something which escapes me at the moment.

We had Newk's afterwards for dinner, and for those of you not living in the Mid-South, let me describe it: they have pizzas, salads, sandwiches, and soups.

And Coke Zero in the fountain machine. Praise be.

Afterwards, Jason and Anna Marie spent entirely too long in Petco, purchasing a thrice of red-eyed fish of some sort. And I walked around other stores as long as my high-heeled-fabulous-sandaled feet would allow.

And when we got home, I let Jason and Anna Marie walk the dogs. And I stayed to home.

(Oh, don't cry for Jason. I'd walked them that morning, and let him sleep in. And then, Lucky nipped Anna Marie on the arm because she'd touched him while he was barking at the cat next door. Actually, it was more like he scraped her with his teeth.)

I did go walking with them after church yesterday, but again, I bowed out of the evening walk. How else am I supposed to get some alone time, even if it's just 20 or 30 minutes while they walk around the neighborhood?


And that brings me to today. I'm a bit headachy and dizzy, which I'm sure I can chalk up to my sinuses. I'm so glad this weekend is over, but I feel like I need a day off to recover!

Oh well - it's just a few weeks until July 4. And, by the time I get a day off for that holiday, Anna Marie will be on her way to Oklahoma for camp!
Posted by Melissa at 12:23 PM

She looks so grown up! My youngest has the stick straight hair too. Since she was little, she wanted curls! The oldest has curls and wants straight!

Anyhoo, the only way that we have managed to get some curl to last is by rolling with bobby pins, spraying, and sleeping with them. This has ensured about 4 hours of curls!

Oh, how fun. I have hair like that. Straight is the word.

Take it from a red head who's hair dresser says, "I've never seen hair as straight as yours". NOTHING you do will make that hair hold curl. I've spent years trying to figure out a trick only to realize there isn't one!