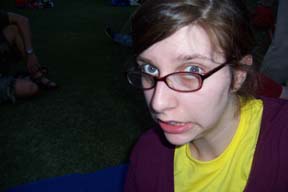 No, this isn't a great picture of Amanda, but it's the only one I had at the time. It was taken (by herself, I think) at the Bellevue fireworks thingy.

My little sister turns 26 today. Actually, I should say younger sister, because she's about six inches taller than I am. If I stand in front, we can use the same mirror at the same time.

She racked up in the present department - I gave her a "wok 101" set with a wok and other accessories, a red leather tote (not a bag, but a box with handles) and an 8x8 scrabook that I promised to fill with her pictures from her upcoming trip to England.

Oh, yeah, she's going to England in November. Then when she gets back, maybe she can write her book: "Did You Know In England, Blah, Blah, Blah," about all the things that are different between our countries: a resume is called a CV, there is universal healthcare, every time the banks close most people get the day off, etc. She's so excited, she doesn't know what to do with herself!

I'm glad she's getting the chance to go. Like she said, if not now, then when? She's young, she doesn't really have any bills, and she has no child or husband to tie her down. It's perfect.

Her birthday can only mean one thing - mine is a week away. See, she was born a week before my fourth birthday. There we were, at my birthday party, and she was still new enough to get presents. AT MY PARTY. That was the beginning of many, many conflicts in our lives.

Anyway, happy birthday Manda. Just four more years, sis, and you'll be staring down the loaded end of "30" just like I am.
Posted by Melissa at 9:46 PM

Man, that is a GREAT picture of me! I need to put it on myspace.

I concur. I just hope my weekend can be as great as yours. Man, I'm going to really enjoy that Pancho's Dressing on that taco salad on Saturday!